Find us on Google+
Menu 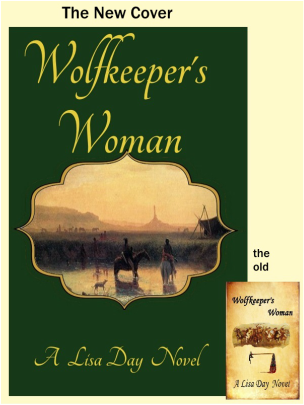 Wolfkeeper's Woman is a story about a woman who raised in an orphanage never was given choices about her own life, and when old enough to make choices Cassie was too afraid to.

After marrying and moving to a homestead in the wilds of Kentucky, her home is attacked by Indians. They kill her husband and  take her son Timothy for another woman who has no children of her own to raise. Continually, Cassie will struggle to regain control of her son.

The warrior Wolfkeeper now has the responsibly for her and considers her an enemy. When another brave points out Cassie's physical attributes he becomes fraught with mixed emotions, and his desire for her grows. Being wise enough not to be rush into something he will regret, Wolfkeeper takes his time and sorts out his true intentions. He will eventually decide he wants a future with her and begins an effort to win her over.

The People refer to her as a ghostwoman because after her child is given away she is not allowed the see, touch or talk to him ever again, as if she is actually dead. To remain in the same village as her son she must learn to accept the role forced upon her. Cassie soon realizes the brave whose lodge she shares is now looking at her through different eyes. He begins to try to show her their path does not have to be full of pain and sorrow.

Wolfkeeper uses his complete control over her as a way to get her to understand she will have no choice, but to eventually submit to him. To increase her dilemma his starts a campaign to prove she does also in fact return his desire. Cassie will experience wrath, fear, mixed with tenderness, loyalty, and compassion at his hands. She must learn to understand, forgive, and accept her new life to find peace. Finding the peace leads her to discover that she needs to choose. A choice only she alone can make.
Get your copy here. http://www.amazon.com/dp/B00A31PMO0

There are excerpts under the SampleSunday page.
And  a few reviews:
This is about the 4th book that I actually cried..... I know this is only fiction but what a story!!! Excellent Lisa Day. I hope you will write more stories like this.

I enjoyed this book to the max. I love reading Native American romance novels, but lately was bored with the stories that were either plagiarized or lacked depth. Either or it was just not fun until I came upon this wonderful story. In the Wolfkeeper's mind he wanted the woman's body, heart, and soul and would not have it any other way. Ms. Day, you have made this reader a follower of yours.

Wow this story was so engrossing that I didn't put it down until I finished, I read this in one night. It was that good in my opinion..An excellent read. I loved it.

A Powerful Battle of Wits Between Opposing Forces! A story filled of fascination, surrender, revenge, loss,despair, grieve, survival and ultimately love. The book focuses on the idea of family: the extent to which a woman will go to have a child of her own to love and also one mother's unwavering love for her son which causes her to go to any lengths to protect him and keep him alive while trying to survive ....

I also think this book is about self-preservation and determination as the main character tries to adapt to her environs. It is a novel of courage and highlights what happens when risks are taken. Finally, without any spoilers, it is a story of love which transcends race and goes against the sensibilities of personal beliefs. In the end it is about redemption and acceptance.
Powered by

Create your own unique website with customizable templates.
UA-34766029-1